AN INTRODUCTION TO THE ABCS OF REBT (RATIONAL EMOTIVE BEHAVOR THERAPY) 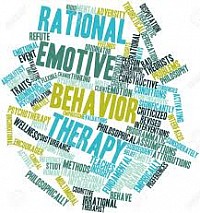 If you get some paper and a pencil to use while you read this, you can learn this technique in 10 minutes.

The ABCs are an exercise from REBT, which is a form of cognitive therapy that is simple enough and effective enough to be used by anybody and – it works. You can learn to do this straight out of a book, or off the computer screen. We use it to examine the beliefs we have (or the thinking we are doing) as some of this may be causing us problems. The ABCs are an exercise that helps us to stop being victimized by our own thinking.

A common example is the issue of someone else’s behavior “making us angry”. This is a very common way of expressing something and we hear it often, but in fact it distorts the situation it attempts to describe. A more accurate description of “someone making me angry” is to say that I feel angry about their behavior. They are not making me anything- they are simply behaving in a way that I am getting angry about. I notice their behavior and then I become angry. The responsibility for the anger is mine, not theirs. This can sound strange at first, but dealing with problematic anger and frustration this way works.

REBT theory says that it is generally irrational and self-defeating to get all worked up about someone else’s behavior. The anger is based on a faulty assumption, which is that the other person SHOULD behave in the way I want them to. If you think about it, what the other person SHOULD do is not necessarily what they DO do. This is a very important element of the equation- reality. They do what they do, and then I/you automatically get angry about it, and feel quite upset for a while- possibly very upset. It’s like walking around with a big pushbutton on your forehead that says “Push here to aggravate”. Is this a useful response to others’ behavior? Probably not.

Since they are very likely going to do that (whatever it is) anyway, it seems, then it would make life a great deal easier if I/you didn’t get angry about it and lose our peace of mind. This is what REBT can accomplish, in many such situations. The missing part of the puzzle, and the part that is the really crucial part, is what WE THINK about what they do.

For example, if I really believe that they MUST NOT do whatever they are doing, and then they still continue to do it, then the DEMAND that I have inside my head that says; “they MUST NOT do that” will put considerable pressure on me from the inside to do something about it, which I am very often unable to do. Often, it just isn’t possible to control other peoples’ behavior. So this will automatically make me feel bad; frustrated, ineffective, angry, desperate, hurt, enraged, and so on because I cannot translate the DEMAND “they MUST NOT do that” into reality. Most external phenomena I simply cannot control. The problem is that I am DEMANDING something that I cannot get. It is better for my peace of mind if I simply PREFER to get what I want than DEMAND it.

How much easier it is if I can become aware of this and make a choice to change the DEMAND “they MUST NOT do that” into a more rational alternative, which actually means something; “I PREFER that they don’t do that”. Once I downgrade the DEMAND to a simple PREFERENCE, the heat is turned down and I can function again. After all, it’s now only a preference!

REBT has a simple exercise to help us make this adjustment, called “the ABCs”. It is used to analyze the situation and change our thinking about it so that without trying to change external reality, we can feel better about it. This doesn’t mean that we should never try to change external reality- sometimes it is appropriate- it’s when it isn’t an appropriate or effective response that we can choose to have a different response instead in order to feel better. To use this ABC exercise for yourself, just pick any situation where someone’s behavior is “making you angry” and take a look and see what it is you are thinking about it that is DEMAND-ing and irrational, and change it into something more rational- a PREFERENCE. It is irrational to demand that people behave in the way we want them to! Here is an example using drunken people making a lot of noise late at night as they pass by outside where I live.

A. (Activating situation) Drunk people outside, making some noise.

B. (Irrational Belief I have about A) They MUSTN’T make any noise.

C. (Consequences of having those beliefs about A) When noisy drunken people pass in the street outside late at night and wake me up I feel angry. It feels bad. I lie awake feeling angry and upset and don’t get back to sleep for a long time.

D. (Dispute the irrational Beliefs in B by turning them into questions and answers) WHY shouldn’t they make any noise- where is that commandment written in stone? Well, it isn’t.

E. (Effective new thinking- substitute something rational instead of B)

Drunken people often tend to be noisy, but it’s no big deal. It is very common that they make some noise on their way home. I will CHOOSE to not upset myself about this, and I will stop even noticing it because it is not a problem for me. When this happens I will say “Ah, the drunk people who pass in the night” (taking care to spell it right) and go back to sleep.

You can make an ABC exercise really short;

A. (Activating situation) Drunks walking past outside, making some noise.

B. (Irrational Belief I have about A) They SHOULDN’T make any noise

C. (Consequences of having those beliefs about A) I Feel angry, etc

D. (Dispute the irrational Belief/s in B) WHY shouldn’t they make any noise?

E. (Effective new thinking) Drunk people do make noise, it’s what they’re good at- its like a natural talent for them. I will CHOOSE to not upset myself about this.

And you can do this on many situations that bother you and reclaim your peace of mind, just look for the DEMAND and turn it into a PREFERENCE. Here’s another one…

A. (Activating situation) I tried to do something and failed

B. (Irrational Belief I have about A) I must always be successful

C. (Consequences of believing B) I feel bad, depressed, etc

D. (Dispute the Irrational Belief in B) where is it written in stone that I must I always be successful?

E. (Effective new thinking to replace B) I would prefer always to be successful but let’s be realistic- that isn’t very likely, is it- so when I’m not successful I don’t need to make myself feel bad.

That’s it- that is how to do ABC’s. Try this technique with something that is bothering you. Try to keep it as simple as you can while you get used to the ideas involved. Be aware of “should- ing” and “musterbation” (these simply mean the occurrence of problem-causing “should” and “must” DEMANDS in your thinking). Here are some things you might think or believe, in which case these could be your “iB”s;

Try to find some Activating situations, iB’s and Consequences of your own and do this exercise with them. Often is easier to start with the C- the Consequences of the A and B and work back to see what they were. Whenever you feel upset it can be a useful exercise to see if an ABC can be done on the situation and your thinking about it. You never know, you might just feel better. Get into the habit of doing this regularly and you might feel a lot better overall. And do please note; this is a tool not just a theory. Success with this (and other) cognitive techniques is dependent on your writing out your own examples and making it part of the way you think.

Made with SimDif 2
Smart Recovery